Workplace bullying is prevalent in our workplaces and is a serious issue that costs corporations significantly in lost time and money due to absenteeism, staff turnover, and medical and legal costs. Studies indicate workplace bullying is a result of conflict escalation and instituting a third party Ombudsman office as an informal conflict resolution channel is an ideal way to tackle this issue.

Jorge is working the night shift. Over six months ago he had a conflict with one of his co-workers who insisted that Jorge was taking over his duties. The co-worker involved the manager who decided that the co-worker was mistaken and that he and Jorge were to continue with their present duties.

Because of confidentiality concerns, the manager did not bring this issue forward to Jorge. Since the manager’s decision Jorge began experiencing on-going bullying behaviours by his co-worker and others in the department. They would play demeaning pranks on him throughout the night, call him names and shun him during breaks. Jorge’s manager works during the day and Jorge is reluctant to report the behaviour and decides he will ignore it and it will eventually stop. This is not the case and he begins to dread coming to work, experiences anxiety attacks and his work performance deteriorates. Jorge eventually leaves because he can’t take it anymore, believes he is being weak but saves face by indicating to the organization that he has found another job.

Early intervention through an ombudsman office can address bullying in the workplace and prevent costly escalation.

Studies show that presented with a list of possible triggers of bullying, unresolved conflicts belonged to the top five most indicated causes of bullying (Zapf, 1999). Likewise, departments with many bullying incidents showed an unhealthy work environment with more conflicts as compared to departments with few bullying incidents (Agervold, 2009). Similarly, investigating the relative strength of a broad range of organizational causes of bullying (i.e. job stressors, leadership behaviour and organizational climate), interpersonal conflicts proved to be one of the strongest predictors of being a target of bullying (Hauge et al., 2007). These results align with Ayoko and colleagues (2003) who, by means of a multi-method approach, found that conflict incidents successfully predicted workplace bullying; and with Baillien and De Witte (2009) who observed that bullying among Belgian employees was predicted by a high number of conflicts in the team.

New findings from Baillien, Bollen and De Witte (2011) indicate that organizations can prevent workplace bullying through their reaction to conflicts. Specifically, organizations can establish problem solving behaviours and discourage forcing as a way to solve conflicts. This may, for example, be accomplished by specific training sessions for managers and their employees on how to deal with conflicts and by stressing the importance of addressing conflicts in a collaborative instead of a competitive way. 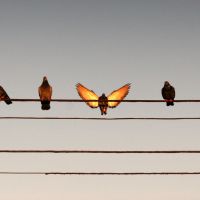